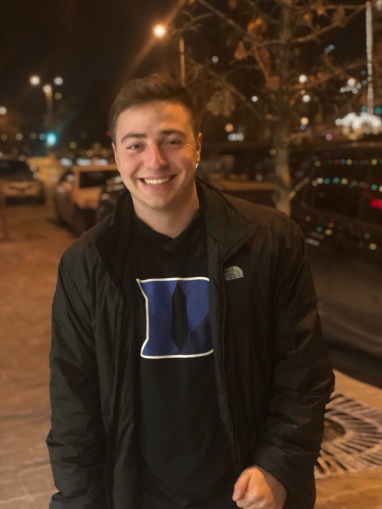 Sam is currently a high school English teacher at Paola High School in Paola, Kansas. In the fall of 2018, Sam was a Writer’s Research Intern at Saturday Night Live.

After returning to Duke in the spring of 2019, Sam created Duke’s very own satirical news show, Duke Disclosure, parodying events on Duke’s campus. He currently serves as head writer, cast member, and executive producer of the show.

Sam has studied and performed improv and sketch comedy at the Amy Poehler, Matt Besser, Ian Roberts, and Matt Walsh founded Upright Citizens Brigade (UCB) Training Center. He was awarded the prestigious Forlines Family Theater Studies Grant by the Duke University Theater Studies Department to continue studying and performing improv and sketch comedy at UCB in New York City during the summer of 2019.

Sam was selected as a member of the second annual StudioDuke cohort, a program that matches students with promising creative projects with alumni mentors working in the entertainment industry. Sam spent the year working on an original TV dramedy series called Artificial, receiving feedback from his alumni mentor, NBCUniversal Co-President of Scripted Programming Lisa Katz, along the way.

During the summer of 2019, Sam served as a production intern at The Daily Show with Trevor Noah. During that time he acted as a production assistant on shoots, assisted the staff of the show, and most importantly had a blast doing it.

In his limited free time, Sam cuddles with his dogs, watches way too much television, wrestles, and roots on the Chiefs, Royals, and Blue Devils.